Adding birding to my outdoor life is to follow my new passion. Sometimes passion leads you in odd directions. Well, at least mine is not into latex suits or hooking rugs! Birding while Black has taken on a wider meaning with Black Birders Week. This online event was launched to help us find each other. Its success has stunned everyone.

The event was hatched due Christian Cooper’s experience of birdwatching in Central park, New York. He asked a white woman to follow the posted signs and put her dog on the leash. She went wild and called the police, claiming that an African American man was a threat to her life. The story went viral. It added fuel to the already blazing fire of police brutality against Black people. At the same time, the list of police murders grew to  include Breonna Taylor, George Floyd and Ahmad Aubrey. Let’s add the impact of Covid-19. We in the the Black community are dying at ten times the rate of white people from the virus – in Canada, USA, Brazil and Britain. The disease has exposed how racism cuts short Black life. Slavery is over, but we are still not free. We are living in its wake.

Black Birders Week is a celebration of Black joy amid the trauma. We have always found ways to love, to make merry, to make our lives matter.  Below are some post from the blog’s archives on birding. Click on the title and it will take you to the full article.

The great blue heron twisted its neck down to reach the water, even as its beady eye stared straight at me. The look was not friendly. Its thin scissor-like beak was long enough to spear my gut.

I stared back at the bird, captured on the page of an elephant-sized book by John James Audubon. The book and its author are icons of the conservation movement. Walking through the art gallery, I browsed some twenty prints from the magnificent Birds of America.

Audubon is a staple of conservation chats around the campfire. He is the founder of modern ornithology and pioneered the methods still used for studying birds, such as banding and annual bird counts. Birds are an early indicator of wildlife and ecological health.

Audubon and slavery. These two words rarely appear together in most conservation talks, websites and books. As a Black woman playing with birding, I am always looking for evidence that we too have a history in the outdoors. The search led to Audubon. 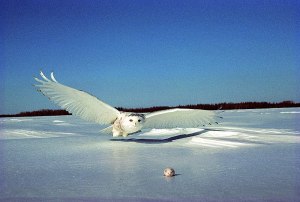 Spring is my least favourite season. The ground is still half-frozen and the plants in my balcony garden are ugly stalks from last year. The days are cold and gray, and always there is the threat of another snow storm. To stop the grumps from growing I went for a bike ride along Leslie Spit. As my butt ached from the hour of cycling, I locked up the bike, and ambled along the nature trail, stopping every few minutes to look for birds.

“It’s my way of repenting for all the sins I committed during the week,” said the woman.

Her name was Andrea. I had spotted her in the distance collecting garbage from the trail. I stopped and praised her for being civic minded. She was as pretty as a potato. Her smile could melt ice.

Andrea was a birder. She said she spent the morning adding to her month’s list of avian friends. It was a still a bit early in the season but the spring migration was under way. In another two weeks the park would overflow with migrants. More to add to her list. The park was a resting spot for the birds flying from the south to the north. In the autumn the migration direction was reversed.

The flock of birdwatchers meandered along the trail in the meadows. Suddenly they stopped. Binoculars raised, the group scanned the copse of trees on the left. Someone softly called out a yellow warbler. The birders drifted along, stopping and starting when a new bird was seen or heard.

There was a rare bird among the birders. Me. A Black woman participating in an activity that is almost exclusively white. I raised my binoculars too and spotted the great blue heron flitting above the tree line. A turkey vulture did lazy circles high in the blue-less sky.

Outdoor recreation is a racialized hobby. Whites do it. Blacks don’t. Birding fits that general pattern as almost ninety per cent of birders are non-Black. In general, birdwatchers are middle-aged, have high income and education, and appeals to slightly more women than men. 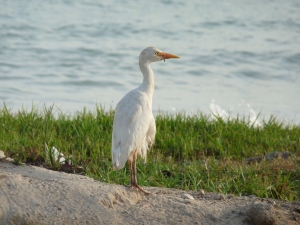 The island made me sad. Many times as I walked along the miles of silvery sand beaches, or in gullies overflowing with flamboyant flowers, my ears cried. Paradise isn’t paradise when the birds are silent.

We were in Barbados. The island is on the main flight-path of birds from both north and south America. Yet it has only about 40 species of resident birds and just one that is endemic. Including visitors, the island has about 270 bird species. Barbados is small, mostly flat and at the far eastern edge of the Americas mainland. Its geography limits the variety of species.

Something else seems to have capped the volume of birds. On a good day, on my early morning strolls along the beach, I would see about a score of plovers or sandpipers dancing on the shore. I was expecting hundreds more.

Did you know that hummingbirds can fly backwards? Me neither.

Supine in a hammock slung between two tree posts, I watched the tiny ball of delight hover over a pink ginger lily flower. Its long thin beak buried deep inside the plant the hummingbird sucked up the nectar. The bird’s wings beat so fast that they made a gentle hum. Then the bird flew backwards, spun around and flitted across the yard.

We were in Jamaica on vacation. The plan was first see the family. Second, visit some Black history sites. Third, do some birding. Yes I know it was a vacation, but these are the things that make me happy. And yes we did go to the beach. Once. Each week. 50 Places: A Black History Travel Guide of London

View all posts by Black Outdoors

My books on Amazon

(1) 50 Places: A Black history travel guide to London. (2) Sailing on a Half Moon. (3) Heartbeats in Africa: A memoir of travel and love.